After a year of development and an additional six months of holding, An Altered Course is now open to the public.

An Altered Course was created to tell a story in a method more people would hear than in a book. Since it is the first game to be created by SoloVid, there are many ways in which An Altered Course is inferior to other games. This fact is also due in large part to the small number of people who worked on the game. As of its release now, An Altered Course is still not as good as it could be; but this is the best we have to give and pray the LORD be glorified in it.

Unlike most other RPGs, An Altered Course does not used a fight system to enhance its gameplay. Instead, the game caters to puzzle-game fans. Beginning with simple mazes, the puzzles slowly become more complex as the player encounters new types of terrain and uncovers new abilities.

You may find the download link on the page below.
An Altered Course
Gloriae DEI

Although a long time in coming, there is finally some news with the game previously known as PathFinder.

As seen in this post, PathFinder was a name that needed to be changed. The new name of the game is An Altered Course.

Currently, the plan is for An Altered Course to be released next Sunday, February 16, 2014. In the meantime, enjoy a promo originally created about six months ago.

It has now been three months since the last post was made here on SoloVid's website. For anyone who may be reading this, this update ought to give an idea of where SoloVid is and has been for the past three months.

Although "PathFinder" is, in a sense, complete, the LORD has seen fit to prevent testing from progressing--at the very least for the time being. So, I am waiting on the LORD's plan and His time just as anyone else who may be interested is waiting on SoloVid. "PathFinder" may never be released for all I know, but I pray that the LORD be glorified in whatever the outcome may be.

There has been some music written in the past three months, however. Here is a song hopefully some of you may enjoy. It bothers me that most of this music has a sad vibe, but hopefully that won't be all there is to music here.

This song probably concludes the OST for the game heretofore entitled "PathFinder." A large portion of the soundtrack is not original as it is default music on RPG Toolkit.

In other news, the game has now moved on to beta phase. 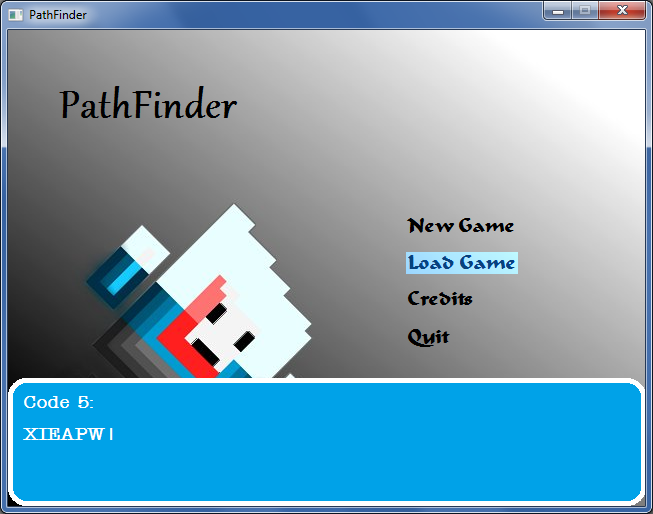 New load-by-code system and user input system. (Note: not a valid code.)
Because of the fickle-ness of file save systems with the current engine for RPG Toolkit, a code system is now in place to be used to save progress. A given code consists of 4 6-digit numbers and 1 literal string of variable length. Alternately the player will have the option to use a file save system, but it is not guaranteed to work on all configurations.

Also depicted here is the new-found custom user input system. Before, the player would be unable to see his typing as he typed, and so a couple testers were duly confused. Now, the player can actively see his typing, and the system matches the custom message window design.

PathFinder is getting to the final stages of development at (roughly but safely) 75% completion. The end is almost in site now.

Imagine a bustling city where dragons sing and flowers bring their colors to the king.
...
That's not what this game is at all.