In the example of this red region, the boardwalk is on a higher layer than the ground. (SPOILER: You can walk under it in this section.) Therefore, the trunk of the tree is on the ground layer, and the middle and top on a layer above the boardwalk. Although we don't have a screenshot for the particular case, this setup would allow the player to walk in front of the tree on the ground layer and the sprites still be rendered in the appropriate order.

OK. You probably could have figured out that part yourself, but what makes this scheme really work out alright in AAC is that everything in the game is tile-based. The blue player in the shot cannot go any closer to the fence either downward or rightward because the fence tiles completely block his movement there. Because of this artificial and somewhat unnatural division of the world into distinct square tiles, it is relatively easy to ensure that there are no impossible rendering situations when it comes to tall objects overlapping each other on different layers.

Multiple layers are good for nothing more than fancy graphics if you can't move the player between layers. So early on in development of AAC we had to start tackling the problem of "stairs" to navigate between layers. Inspired by some default stair graphics, our early attempts turned out like this:

Let me digress for a minute and explain what I mean about the coordinate system, since this will be important for some future discussions:

In a 2D game, coordinates are most naturally represented with the following system:

(Back to the stairs...) There are two obvious problems with the simple method of creating stairs: 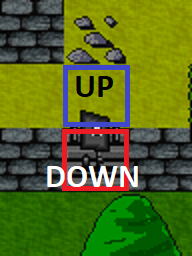 I realized later that there is an easy answer to the two problems with the simple stairs method: With this solution, the player experiences a smooth transition between layers without graphical oddities or awkward functionality. Under the hood, though, these type of stairs are a lie: neither gradually adjusting the elevation of the player nor instantaneously transporting them to a different layer. We may revisit later why this is potentially a bad thing.

As mentioned in the last post, falling off of cliffs was a gameplay mechanic AAC stole from some inspiration games. There were essentially two variants of this mechanic in AAC:

For the simple drops, we just allowed the player to walk onto the tile of empty air in certain spots on upper layers. When the player would enter this tile, a short program would drop the player to the layer below and do a fancy animation to offset the player's y coordinate (+32 pixels) to account for the change in elevation graphically.

Unfortunately, this one-to-one mapping of upper to lower cave tile coordinates had a flaw: What if the player fell onto one of the wall tiles?

In this event, the program had a special case to push the player downward (positive y axis) one tile (32 pixels).

Yet another 3D element used in AAC is that of stepping stones for upper layers. We had two dominant manifestations of this mechanic in AAC:

These mechanics in the game really started to show how limitations of a particular game engine start becoming difficult to work around when trying to accomplish something outside the scope of its intended types of games. In RPGToolkit, since everything exists in flat layers, every location is either blocked or traversable, and every object (like the rock) is just solid. RPGToolkit has a concept of "vectors" which represent collidable polygons set on some layer in a level that are either non-traversable or that trigger specified code to run. There is no notion of traversable space with no ground under it. Since the two mechanics are related, I'll focus on the pillars because of their higher difficulty and stronger relationship to 3D.

So how did we solve this problem? Well, the answer is complicated, but I'll try to explain it in short.

Second of all, we actually split each logical layer of the game into multiple layers in the engine, such that every logical layer had one engine layer for background graphics and one engine layer for invisible info tiles. We needed this extra layer of invisible tiles because it was a lot easier in this engine to check what tile was rendered at a certain position than to check what vectors were present there.

Finally, every time the player ran up against a pillar, the code would

2.5D games can achieve certain effects of 3D in a 2D game engine based on layers, but implementing the features is often a significant ordeal because of the workarounds required. This post should have illustrated some approaches to solving some common problems for desirable game features in 2.5D games, and I personally think that even the developers of the inspiration games (e.g. A Link to the Past and Golden Sun) would have used techniques similar to these to execute that extra .5D in those games. I also hope that this post begins to show some of the reasons why having a more robust 3D game engine is desirable over a more purely 2D engine, but a further analysis of those reasons will have to wait for the next blog post.

Shout out to ezgif.com for enabling me to prepare the awesome GIFs in this post. I would highly recommend 10/10 based on first experience.