After a long period of not posting, I've decided to have a change of pace and write about some other games I've played outside of the work we are doing at SoloVid. (Maven hasn't moved much in the last year, but we're still hoping to see it come!)

I'm not much of a gamer, but I do enjoy games. I particularly enjoy the fascinating things I learn about game design from other games. So today I'm going to talk a little bit about Rakuen, a storiented game by Laura Shigihara. The game very much takes queues from Kan Gao's To the Moon, but there are some things Rakuen has to add to the genre.

Just to clarify the subject, To the Moon and Rakuen are a part of a genre of games I like to call "storiented" games (though more commonly known as "narrative" games). These games focus heavily on communicating moving stories while still maintaining the game medium. They do a wonderful job of telling stories, but they tend to be notably lacking in challenge as a core aesthetic (cf. Extra Credit's video on aesthetics); so they don't feel "fun" in the same way that games traditionally do.

In To the Moon, Kan told a beautiful narrative that has brought tears to many eyes through its effective suspense, pacing, and music. However, the game is almost strictly linear, and the game rarely rewards the player for spending time completely exploring the areas of the game. Each scene of the game has a central point of attention, and there is little reason to try to find other things either because they are not there (and you won't be back) or because you aren't supposed to (or able to) do anything in a given side area until a later point in the game. 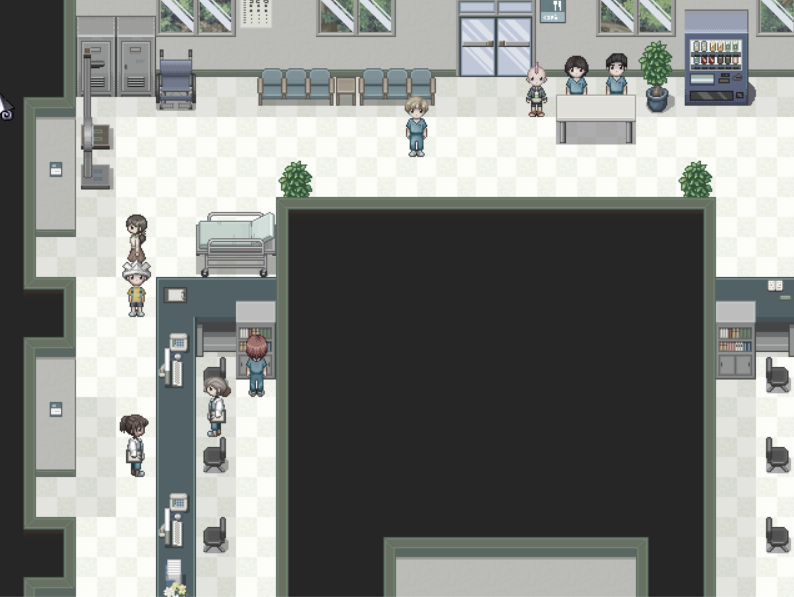 So that's where Rakuen picks up. In Rakuen, I got a strong sense that Laura was trying to build a more cohesive and immersive world. In the screenshot above, you can see the main room of the hospital—one of the two major areas of the game's world. Rather than forcing the player to walk strictly from scene to scene, Laura places the game's scenes within a single world which the player becomes familiar with early in the game.

Why is it a good idea to cram a game into a small, cohesive world?

The idea of this kind of world is not new. We saw it in Zelda: A Link to the Past where all of the dungeons are part of the same world. The key is that the game slowly opens the world to the player by removing certain soldiers, granting strength gloves to lift heavier rocks out of the way, and opening the dark world. Apparently, this idea was also at play in games like Metroid which have players backtracking to open new doors.

Again: Why is it a good idea to cram a game into a small, cohesive world?

I think the answer is simply that slowly opening up a world allures the player by first tantalizing them with the things they have to look forward to and later satisfying that desire with new things in familiar places.

It is interesting that, in Rakuen, Laura doesn't really make the game any more "open-world" than To the Moon. The player still has to follow a very narrow path through a predefined sequence of scenes. However, the illusion of more free-form play through the linked world allows the player to feel as though they could always go anywhere and do anything once they achieve a certain level in the game.